One thing is for sure about 99.8 percent of the time: if I sit down on the couch right after I put the girls in bed, I won’t be getting up… likely for hours.

I always think, “I just need to sit down for fifteen or twenty minutes; then I’ll get up and finish the dishes/pick up the house/etc.” It feels like I can’t do anything but sit down. My body has literally no option.

My mind does kind of tease me about that feeling sometime, though; because you know if one of the girls became ill or something, I would jump off the couch to rub a back, or clean up the mess, or give a drink, or start the laundry- all that those wonderful middle-of-the-night episodes entail. Conversely, if a trusted friend appeared on the doorstep to say, “Hey, your kids are in bed; I brought you a Target gift card, go shop for an hour!” I would probably be able to muster that little last bit of strength to do something fun.

Note: I am not saying at all that it’s wrong to sit down at the end of the day to just relax. I just know for myself that if I do that right after putting the girls in bed, it is very unlikely that I will get back up to do something profitable. Even though I always intend to.

Which brings me to a point of inspiration.

A few weeks ago, I read an article that said something like this, “You will never do what you want to do until you decide what you won’t do.” (Unfortunately, I cannot track down that post anywhere!)

I thought it was a pretty good point and began to think where it could apply to my life.

One thought led to another, and here is what I came up with:

Thing I won’t do #1: I won’t sit down for twenty minutes after the girls go to bed.

At all. Anything standing, moving or walking is fair game. (except leaning over the counter looking at my ipad)

It’s amazing how that first small step of self-denial is so hard; yet the subsequent steps are so easy. Just picking up toys, putting away books, getting dirty dishes out of the sink, or laundry into the dryer doesn’t seem so taxing after all. Wow, I’m getting a lot done!

The other sort-of rule is that I don’t watch the clock. Ding! Twenty minutes; Pinterest, here I come!

This might be takng it too far, but I want it to be about my heart, not just a silly rule I made for myself. Body, I am in charge and you will do what I say. You’re not as worn out as you think you are.

Funny sidenote: I am currently sitting on the couch, truly exhausted from a taxing week of homeschooling and a sick little one. Special circumstances do apply.) = )

Anyways, this has been a huge help to me! I think it’s been about a month now that I’ve tried it and I would say there’s been 80-90% success! I find myself doing profitable things for longer than twenty minutes, genuinely enjoying it, and accomplishing even more than I intended to.

And then when I do sit down? it feels really, really good. And I’m not as likely to relax too long before going to bed.

Do you have any reverse psychology that works for you?

If you have trouble with a time-sucking couch, try this and let me know how it goes. = ) 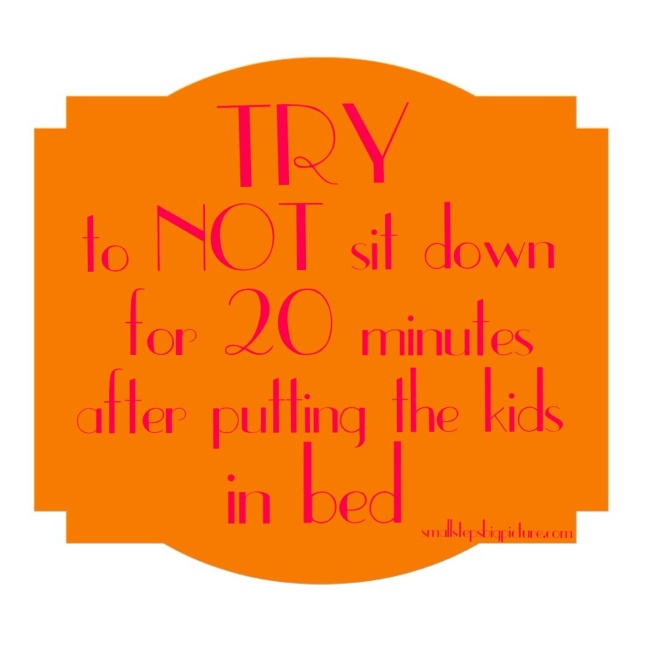 4 thoughts on “When I just want to crash”