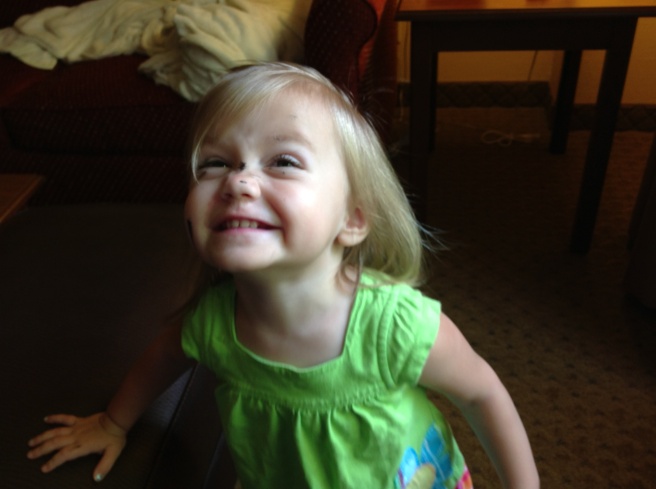 I think that pretty much explains it. Here are some pictures I thought ya’ll might enjoy: 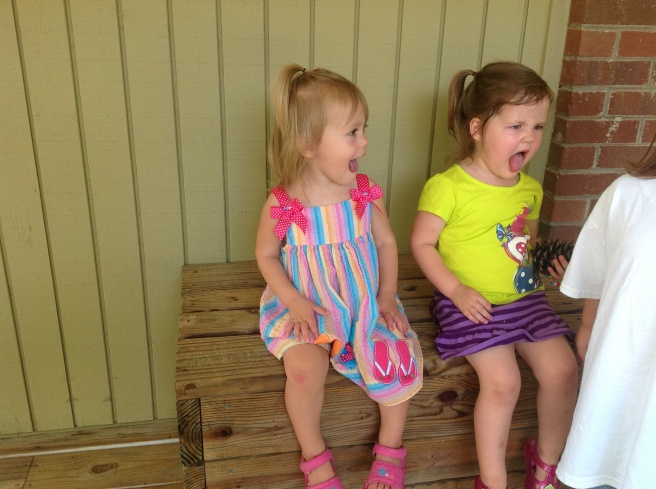 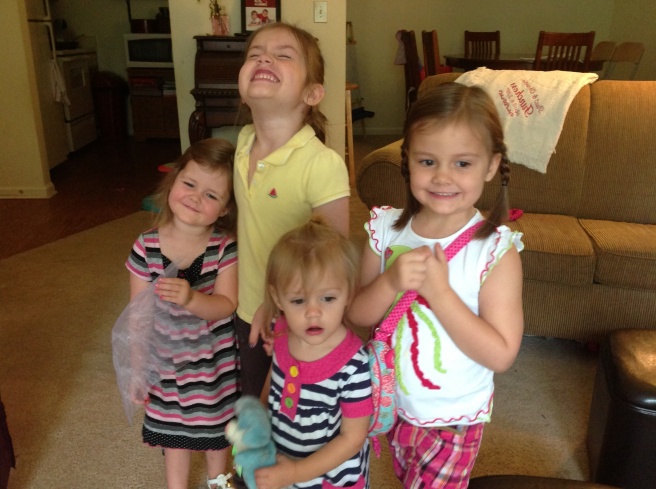 A lovely long weekend to you all!

Hello all! We posted Gracie’s three-year old pictures here, and today you get to see her birthday fun.

We love you, Gracie!

I do apologize for the poor quality of the evidence photos; but after all, most suspects don’t stand still.

I love these pictures.

I actually dressed her up, fixed her hair, and took her outside for these pictures on her birthday. Yay for a small step towards the massive list of things I want to do with my kids!

Gracie, I’m going to miss you being two; you were about as perfect as a mom could want. So excited to see how three will be!

I am woefully behind at posting pictures! Hoping to catch up… here are the shots from our quick trip to visit with Paul’s parents and grandparents. 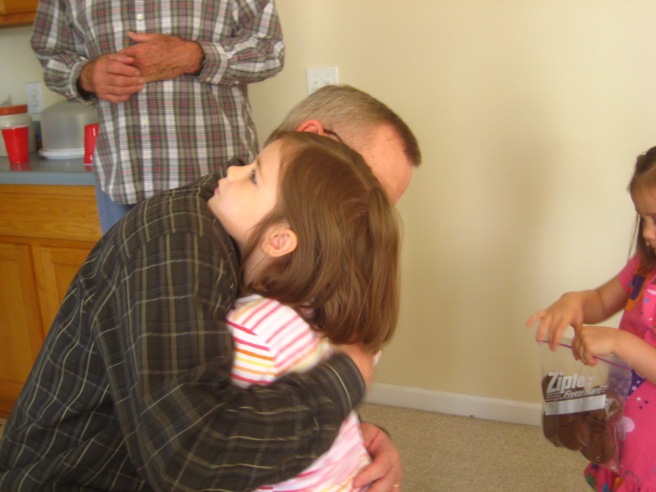 Uncle Daniel is only represented in these pictures by the cookies he baked for the girls. Can you find them?

My girlies love clothes. And you can imagine with four of them that we go through a lot. Their Nana loves to shop for them and also gets great hand-me-downs from a friend of hers who has a granddaughter just older than Hope. (how convenient!)

Last time we were at Nana’s house she gifted us with a huge bag of clothes! Which we couldn’t look through for several days! And the girls were going crazy! But I didn’t want to have a mess at an inopportune time! (and do they ever make a mess trying on all those clothes… but they have fun so it’s all good)

When the day finally came for us to go through the stuff, I gave the girls specific instructions: “Girls, I’m going to put the little girls down. Do not touch the bag until I come back out!”

When I returned to the living room, I was shocked and amused at what I found: 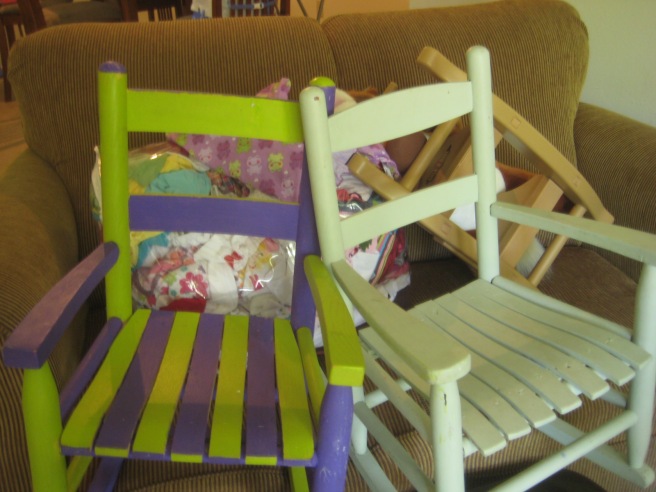 The girls had literally made a fence around the bag. “We put all the rocking chairs and ottomans around it so we would make sure we didn’t touch it, Mommy!”

I laughed so hard, took a picture, and thought, “I’ve got to write a post about that!”

Pardon a quick history lesson: Have you ever wondered where the Pharisees came from? They’re nowhere to be found in the Old Testament, and then they suddenly appear unintroduced and unexplained, playing a major role in the gospel narratives.

The Pharisees were the upholders of the law, the self-proclaimed keepers of the kingdom. In their zeal to keep the law and insure that the people of Israel would never again fall into polytheism, the Pharisees had built fences around the law in the form of new laws. These new laws were meant to keep people from disobeying the original laws. But then, those weren’t good enough, and more were put into place. Eventually, the Pharisees made their law-keeping a law unto itself. The purpose of the law in displaying God’s beautiful character was completely obstructed and opposed.

Paul has an awesome “rose garden” illustration about this, but you’ll have to ask him about that.

I cannot explain the depth of my amusement at the fact that my children made a literal fence around something they weren’t supposed to touch. Their childish version of Pharisaism didn’t bother me at all; but wow am I ever going to have an awesome example to use with them when they’re older!

Two nights ago, I made the rutabaga.

And this is how it went: 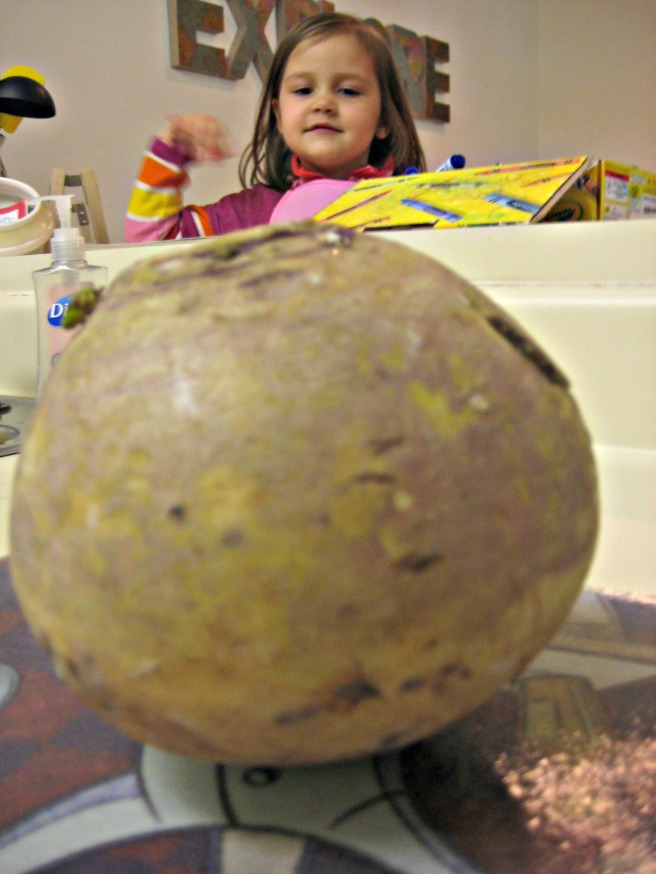 I started about two hours and fifteen minutes before I wanted to eat dinner. Everyone says it’s really hard to peel and chop. The girls sat across from me coloring on the small counter where they could still see what was happening. Thankfully, the ordeal kept them entertained the whole time.

Peeling wasn’t actually so hard; it took me twelve minutes. And I’m sure I didn’t use the right kind of knife.

Chopping? Took forty-five minutes. Again, not with a good knife or skilled knife-user. I could never get a big enough chunk off to really chop, so it was just a glorified peeling of the whole thing. I would see a little piece sticking out and cut that off. Turn it and find another place sticking out. It got faster as I went, but my first finger was completely numb by the time I was finished. (not recommended for pianists)

But the good news was, it cooked just fine in all of it’s odd shapes and non-chunkiness.

I added three chopped potatoes to the pot and covered it all in water.

After salting it generously, I let it boil for around thirty minutes. It was definitely tender.

So I drained it and threw a stick of butter in to let it melt. (When I say butter, I actually mean Blue Bonnet. Whatever kind of imitation butter that is.)

I warmed up a cup of half-and-half for a minute on 50% power in the microwave. Added that, more salt, pepper, and a little bacon grease.

Then I ate all the bacon that I had cooked as a reward for all my hard work.

After that, you know the drill… mash it, or beat it until it’s nice and fluffy.

Sophia and Paul loved it.

Hope, Gracie, Mckayla and I tolerated it.

Rutabaga tastes a little bit like turnips to me. (Bleck: turnips are definitely the least favorite properly prepared thing I’ve ever put in my mouth!) However, these really weren’t bad! I passed them up for leftovers this afternoon, but had no problem eating them when they were fresh.

Hope’s reaction cracked me up. (Since it was her idea to buy a rutabaga anyway.) Trying to be polite, when I asked her if she liked it she said, “Well, not nes-arily. I mean it’s not like as bad as asparagus, but it’s not as good as peas and chicken. You know, I mean, like it’s okay. I can eat it.”

If I make it again, I’ll probably add more potatoes. A lot of recipes I looked at said to make the potato/rutabaga ratio equal.

The two recipes I referenced can be found here and here.

Here are the pictures I got. 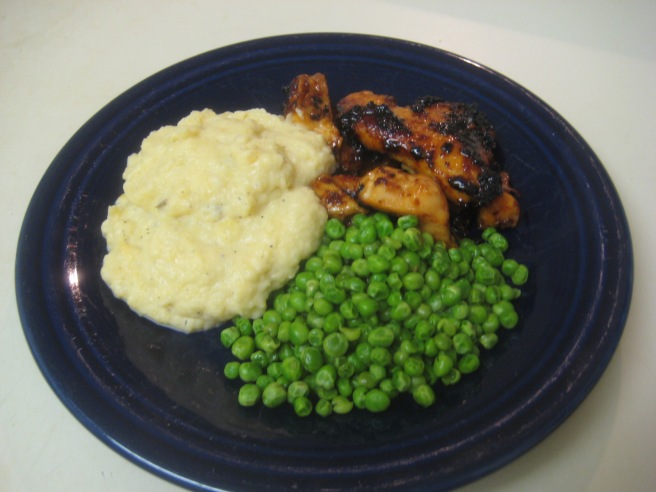 And the kids meal version.

What do you think about rutabagas?

Ever been taken back to a room at the doctor’s office, have a nurse weigh your child, ask if you have any questions, and then say the Doctor will be right in?

Ever found yourself wondering if that nurse remembered to tell that Doctor that you were even there?

Here are ten ways to be proactive at entertaining your children while waiting in the doctor’s office. (Please note: these would not really be appropriate for the waiting area, but are fair game once in the room.)

1. Play I-Spy. The rooms at our pediatrician’s office are very colorful, so this is always something the girls want to do.

2. Play Simon Says. My girls are a little too young for this, so it’s really just a glorified version of “Do what Mommy says.” Hey, why not throw in having them respond with, “Yes, Mommy!” and make it a training exercise as well?

4. Give bumpy horsey rides with the kids on your knees.

5. Explain the different “doctor” equipment in the room.

8. Play copycat. Do something and have the children imitate you. (Jumping jacks, standing on one foot, turning around, making a silly face… they love this one; especially once they get to be “the cat.”)

9. Play thunderstorm. Pretend it’s raining and everyone has to huddle under an umbrella to stay dry. (The girls actually made this one up; they love to make rain noises by slapping their laps.)

10. And if the doctor is still not there, Repeat.

The point is to be creative and be happy. If you are impatient, your children probably will be, too.

Really the sky is the limit.

Last time we went, I happened to have a brush in my purse because we rushed out so early and I hadn’t had time to really get them ready. So we played beauty shop; I fixed their hair while talking to them in my awful imitation Brooklyn accent. They thought it was hilarious. (If they only knew it was helping me stay sane as well… )

What do you do to occupy your children while waiting?

Oh yeah, and if all else fails, tell them to make faces and take pictures. = )

Here are a few funny things that were heard around here this week ~ hope you enjoy!

This morning, Gracie got out of bed a little earlier than I wanted to. So after taking her to the restroom, I brought her in bed with me. One of my favorite things to do with the girls is to ask, “What is your favorite…?”

“Gracie, what is your favorite thing to eat for breakfast?”

“Strawberries and eggs.” No surprise there; she’s said that before.

“What is your favorite thing to eat for lunch?”

“What is your favorite thing to eat for dinner?”

“Gracie, what is your favorite thing to eat for a snack?”

I reasoned with her, “You can’t be hungry, Gracie. We just ate.”

“I’m hungry from the talking!”

Hope and Sophia were cleaning up their papers and crayons after coloring one afternoon. Sophia held up two cut-out figures that closely resembled a man and woman for me to see.

“Wow, Sophia, those are great. Who are they?” I asked.

Her voice became very excited as she held up the woman who I could now see had a beautifully colored dress, “This is Aunt Laurie at her wedding!!!”

She held up the rather long, skinny figure of a man, “And this is Uncle Aaron. He was so excited he turned into a microphone!!!”