In light of today being the Kentucky Derby, I thought I’d try to get these pictures posted.

About a month ago Paul had the privilege of attending a conference in Louisville with some other members of the pastoral staff. The very next week, he had to return to Louisville to physically attend for two days a distance-learning class he was taking there to finish up seminary in time. He talked about the possibility of us going with him, and not wanting to be without him for two weeks in a row we jumped at the chance!

We had such a blast! It truly was a family vacation.

I don’t have pictures of everything, but I’ll share what I have and try to fill you in on the rest.

We really enjoy riding in the car together; mainly because Daddy is so fun!

Our first picture here is at a Dairy Queen. We actually just stopped to use the restroom, but by the time all of us girls were done, Daddy was waiting for us with ice cream. Yay!

When we arrived at the seminary we discovered they had a hotel on campus with really good rates for students. Paul went in to look at the room first and came back warning me to think “dorm room.” But… it was absolutely gorgeous! Two separate rooms for us and the girls with a beautiful, big bathroom in between, what a treat! And the fact that we were on campus made the car situation super easy.

While Paul went to class that night, I took advantage of some girl time and ate at Panera Bread. It’s a very important lesson my girls needed to learn that when it’s cold outside you go to Panera and eat broccoli cheese soup. = )

Actually before that, we found a park really close to the seminary and played there for awhile to get out some car trip energy. It was freezing and Mommy did not pack warm enough jackets. = /

The next day our big adventure began. I looked online for stuff to do with kids. Parks, bounce house places, and typical kids museums were all options, but I thought, they could do that stuff anywhere. Since we were in Louisville, I wanted to do something special to that city. And then I saw it… Churchill Downs.

Long story short, we decided to go for it. And I’m so glad we did! We missed the official tour, but the lady at the desk called a man over, “Hey Martin, take ’em out to the track real quick.”

So we got a private tour and didn’t even have to pay the fee! I was astounded. The girls loved it. It was so amazing to be there and to think of all the history that’s taken place. Sophia even put her hands in the dirt of the track. Needless to say, we were super excited to watch the race today and have the girls see why it’s so famous.

Here are the pictures; I’ll just comment below them.

Hope discovered a name that she thought was very funny. “Behave Yourself.” It’s so fun having a kid who reads. = )

After the generosity of the lady at the desk, I wanted to go in the gift shop to at least buy something. These hats were at the entrance and the girls had a blast trying them on. You can imagine. After looking around the shop we settled on a Churchill Downs coffee mug for Daddy and a “Derby Time” sippy cup for the new little baby. Since they were the ones that missed out.

Okay. Take a deep breath. That’s all of the Churchill Downs pictures, but there are more to come.

Paul was able to go to the Louisville Slugger bat museum on his first trip to Louisville, so being baseball lovers we were excited to go back with him. 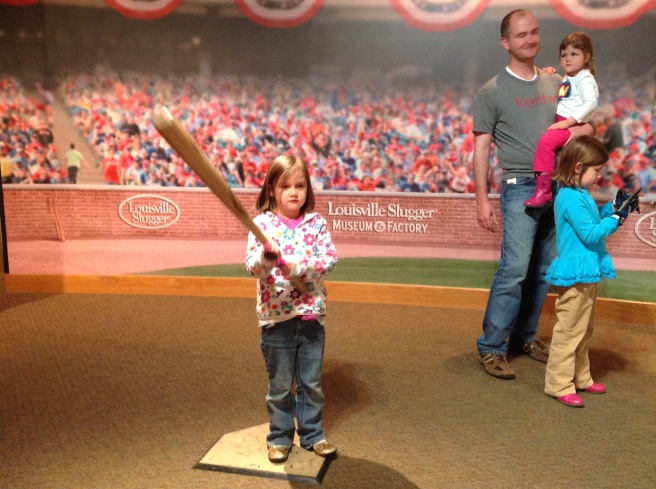 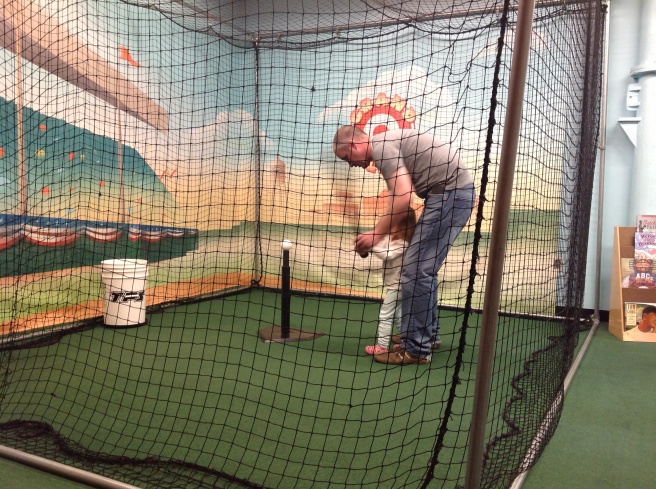 After the bat museum we were off to the Creation Museum on the KY/OH border. Mckayla loved the dinosaurs! When we came up the stairs to the one dinosaur deck she looked around and said, “Whoa Mamacita!”

There was a petting zoo where we fed camels and where Sophia had a donkey bite her! Ouch! It didn’t break the skin and she didn’t cry, but it only confirmed Daddy’s dislike of animals and petting zoos and the like.

Probably our favorite thing in the whole place (besides the free stroller rental for Mckayla!) was the bug room. Or Dr. Crawley’s Insectorium, to be precise. Hope was in awe!

Sadly, this was the only picture I took in the whole place. 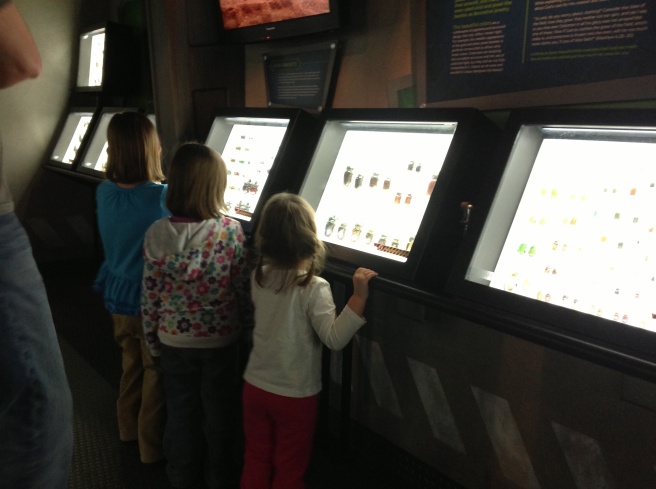 After the Creation Museum, we crossed into Ohio to drive through Cincinnati and see what we could see. What a lovely drive! Going through old downtowns is right up our alley.

For dinner we crossed back over the river and ate at a wonderful seafood restaurant right on the river. The sun set over the skyline of Cincinnati as we ate with our happy not-so-little family. In some ways I could kick myself for not taking a picture of that, but in other ways, it was almost too special for a picture. What a blessing to have a whole day to spend with just us, seeing and experiencing new things and just being together.

The next day we stopped at Cracker Barrel for lunch on the way home. We always seem to go there at least once on a long trip. = )

Somehow I forgot to mention that after Impellizzeri’s Paul took us downtown and showed us where he hung out the week before. We got to see his hotel, the Yum! Center, Smashburger, and made a little visit to the Fudgery. Now that was some Yum!

This was a lot of pictures! Thanks for sticking with me. I actually feel like I should have taken more, but I’m working on it. = )

We will remember this trip for a long time.

And I leave you with what I thought was one of the cutest pictures from the trip.

4 thoughts on “For family and friends: Louisville”